Using Monorepos Is Not That Bad (Case Study)

The decision either to use or not to use monorepos has been very difficult for a lot of reasons, specially when you make a quick research and read this article titled "Monorepos: please don't" and then read this one titled "Monorepos: please do!" a lot of good reasons here and there, in this article I'm telling a quick story about me and my team at Zoover and why we get into the decision of adopting monorepo in our projects, what tools we used and how was the impact and workarounds for common issue.

The article looks a bit long but believe me it worth every moment you will spend reading. 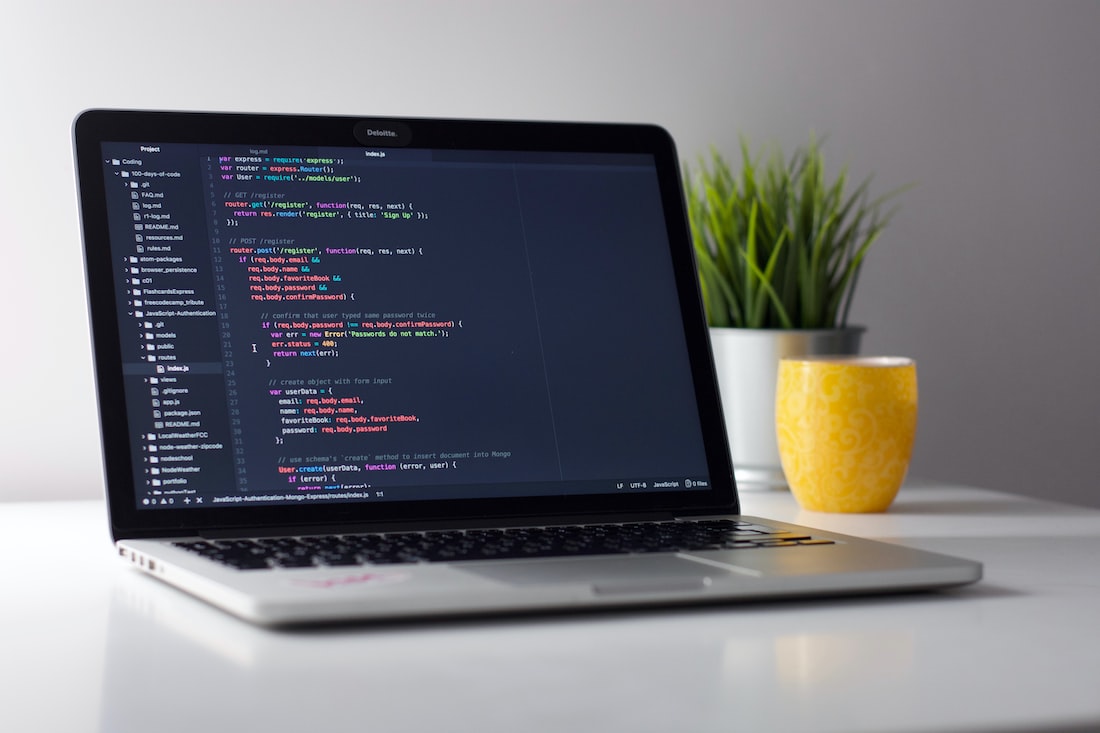 A brief about the problem

let me tell you first what is the situation and what pushed us to that decision in the first place.

I was working for a company called Zoover since August 2019, working in the travelling industry, and shortly after working hard in building our booking system to turn into an OTA (online travelling agency) COVID-19 hits hard and governments closed travelling, and obviously we get affected badly by that.

A few months later we got acquired by another company called Vakanties, what makes us (Dev Team) having 2 brands to support and a lot of services/libs should be shared however the tech stack is not really matching and here comes the problem. 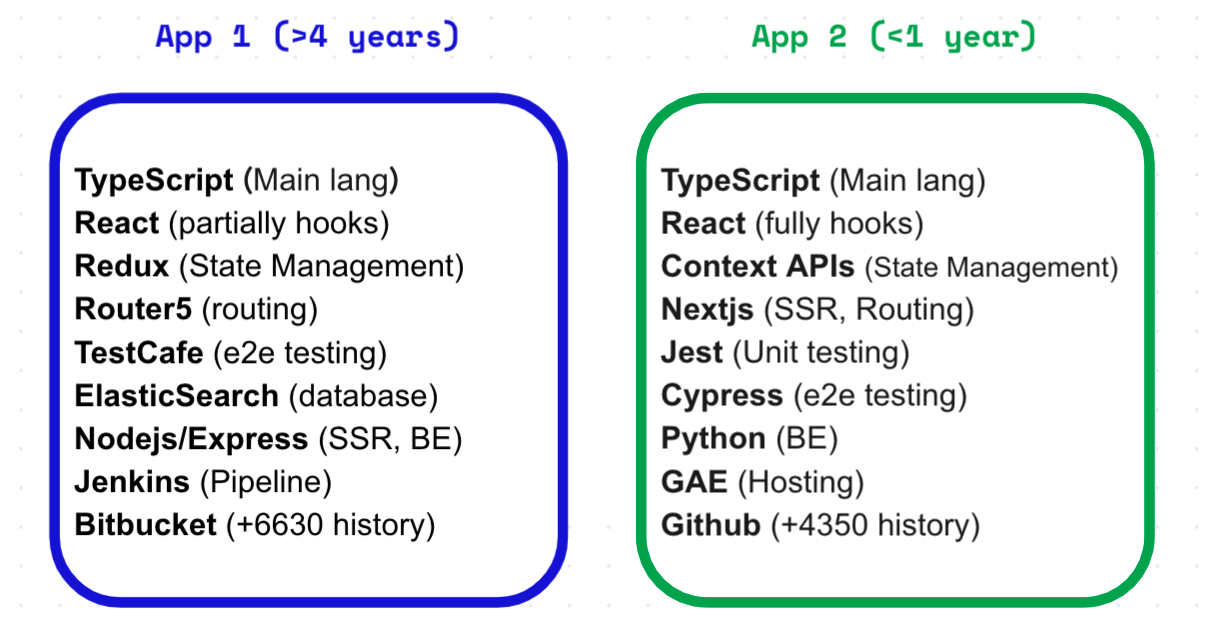 As you can see there are some matching in the tech stack but still a lot of things are not easily re-usable between the 2 websites, and since we are now a single team to develop and support 2 different websites, we need to minimise the time to create new features or fixing a bug for both brands as much as possible.

The core functionality of being an OTA which is the process of booking on our 2 websites are almost identical, and we need to share that part at least in the beginning

And a lot of challenges started to shine:

The goal here or the key metric for having this as a successful step is to have more story points burned each sprint and have less effort for developers to create/fix and change in both brands at the same time, share services and common parts so we can use the same 3rd party libs in both brands.

I made my research for people who had a similar problem and how they tried to fix it, and I found some respected amount of people talking about different ways to overcome that problem, the most obvious ones that I found useful were:

💡 First, what are monorepos?

Simply a monorepo is a one big repo that has multiple apps in a folder structure instead of multiple repositories structure, not only apps, also libs, docs, tests, build files, backend, and frontend …etc

🤔 who are using monorepos?

All FAANG companies and more including (Facebook, Netflix, Twitter, Microsoft, ... etc ) what might make it a good solution for us too!!, if it works for all those giant companies most probably monorepos could work for us as well.

However, during my research I get hit by some drawbacks for using monorepos that intimidated me from the future of the project, some very common issues that people who are against monorepos said such as:

Given the results I decided to park the idea of monorepo for now as it has its own problems.

Another solution was to use multiple repositories (Polyrepos) as it is right now, and building a small PoC (Proof of Concept) to see how smooth it will be in sharing code and assets and apis between the 2 brands.

About the shared code we can package it as a shared library and publish it on a private registry on NPM or GPR (Github Package Registry), versioning of each published lib can keep supporting the 2 brands at the same time, sounds like a good one 👌

I found that it has some very good features and also some drawbacks, here is what I found:

So for using Polyrepos, I found very good reasons to use but also there are some issues that I have to face as mentioned. so, I have to park it as well until I check the last available solution.

The third introduced solution to fix our problems was to use git submodules, and it is basically cloning a repository into a directory inside another repository and run some git commands to make that subdirectory a submodule from the parent git repo, you can read more here.

After making some research about the expected results and making a quick PoC here is a list of what I found issues:

Even for this solution you have to compromise and not an easy decision to adopt it, specially after discussing it with the team.

Then I reconsidered the 3 solutions and compared them by the benefits we can gain out of them as all of them has its own problems. 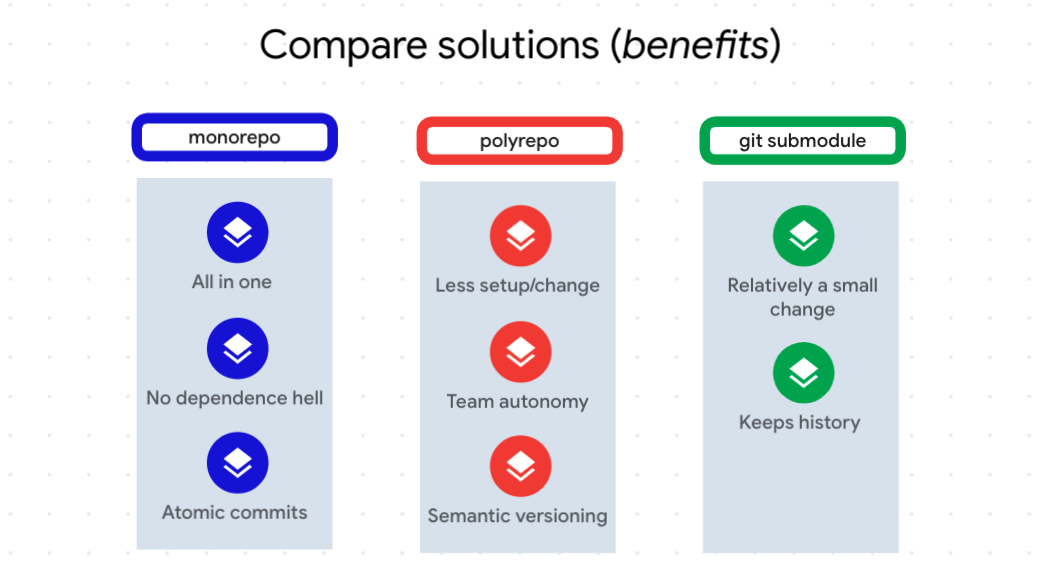 Out of the comparison above, we found that the monorepo solution is the one that fits our needs most and we can work on finding ways to avoid its known problems, so let's give it another shot, also found this article "Monorepos: please do!" which respond to all problems mentioned to the opponent side's article.

Raise of the monorepo solution “again”

This time, I needed to make sure that we are picking the right tooling and making sure that the above mentioned problems are far from our team as we are a relatively small team and our app is less scalable comparing to the apps in the FAANG companies that has these problems.

In my journey in finding a good Monorepo tool, I found a lot of solutions by big companies including: Pants by Twitter, Bazel by Google, Buck by Facebook, Rush by Microsoft, and other solutions that are made specially for applications of our size like Nx, Bit, and Lerna.

I started by Nx, I read very good reviews about the tool and it's abilities and I was very enthusiast to try it out, and here are the good things about using Nx:

👎 Some bad things (at this moment) that I found:

Then I decided to give Bit a try, here is my thoughts at that moment:

Finally, switch to the great combination (lerna + yarn workspaces), it is a future proof, used broadly with our stack, and I even used it in a react lib side project that I made before, so I have some good experience with it but no experience of usage with big projects, here is a list of good signals about using Lerna:

Challenges we faced when using a monorepo

Everything comes with its taxes, having monorepo is the same, some challenges are well known for the community and some others are specific to our case that we discovered during our trials with out first draft of a monorepo:

Well, that was a tragic but we could manage that finally with some steps and other tooling we decided to adopt, check that out in the next section.

Benefits we gained with a monorepo

Let's talk first about the benefits we gained by having the monorepo setup for the 2 brands we have and make the whole Frontend projects share a lot of code between the 2 projects:

We managed to workaround the common issues as well mentioned about monorepos in general:

Well, after all that trials and given the results we had it is clear that: Using Monorepos Is Not That Bad!

Are monorepos for you?

Some of you might be very enthusiastic now about using a monorepo in their next project, BUT are monorepos for you too? the answer is that it is not for all projects and not for all teams, it always depends:

Here are a list of situations that using a monorepo in them is not wise:

In this article we talked about the problem we faced at Zoover that pushed us to find a solution for sharing code easily and merging with another teams codebase, and how monorepos fits us comparing to polyrepos or Git submodules, also explained what are monorepos, and who are using them, showing some good tools that help in managing monorepos including Nx, Bit, and Lerna.

🔗 Photo by Clément Hélardot on Unsplash